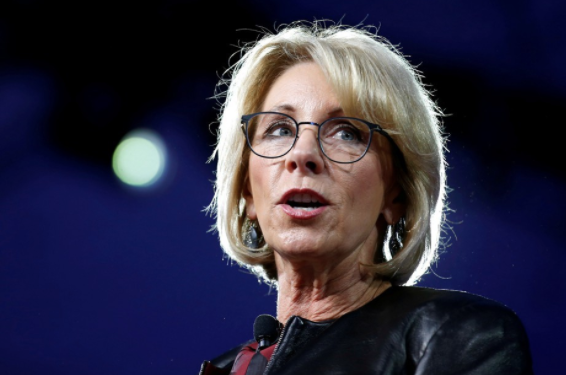 During the 1980’s, experts under the Education Secretary worried about American education and published "A Nation at Risk." In this, Secretary of Education Bell recommended implementing a common core curriculum, to implement standards for high school students. President Reagan, who felt big government was not the solution, opposed an expanded federal role in education. In his campaign for the White House, he had even advocated the abolishment of the U.S. Department of Education, not unlike President Trump. This left the work of educational standards to the states.

When President Bill Clinton took office, he built on President George H.W. Bush's education plan in drafting his own education proposal: "Goals 2000." In the Educate America Act, signed in 1994, the bill mandated the creation of the National Education Standards and Improvement Council (NESIC), which had the authority to approve or reject states' standards. However, when Republicans gained control of Congress in the mid-term elections in 1994, many voiced strong opposition to an increased federal role in the education system, so no one was ever appointed to serve on the NESIC.

George W. Bush signed in landmark education reform, that significantly expanded the role of the federal government in education while trying to respect state control over standards with the No Child Left Behind Act. NCLB intended to use assessment as means of increasing accountability for underperforming schools, expanding school choice policies for the students’ whose needs remained unmet in traditional public schools. However, the accountability measures in the new law, including increased standardized testing, scores reportings and corrective actions for poorly performing schools have proven to be turbulent in the discussion on education reform.

In 2009, Obama used a component of the stimulus package (the American Recovery and Reinvestment Act) to create Race to the Top, a competitive grant program mean to incentivize states to adopt the education policies favored by the administration. Race to the Top required states to adopt common standards, a huge bonus for the Common Core program. The Obama administration also invested in testing groups to design assessments in line with these standards, with states initially adopting these in droves. With it becoming increasingly apparent that NCLB’s goal of 100% proficiency in reading and math by 2014 would be impossible, the Obama administration began providing waivers to help schools get out. In late 2015, Congress reworked federal education legislation into th Every Students Succeed Act, devolving much of the accountability authority back to the states. Some critics fear that ESSA devolved too much responsibility to states who previously failed students. Another of Obama’s foci included early childhood education, providing similar federal grants to expand access to preschool. Obama also focused on student debt relief, creating an income-based repayment plan based on students’ income after graduation, reducing the interest rate on the biggest government loan program, and pumping more resources into the Pell Grant program.